Fall and winter offer a second chance to grow all the delicious greens and wonderful roots we savor in spring. They’re even easier to grow, thanks to decreasing weed pressure and reduced need to water. Many winter greens, like kale, collards, and spinach, even taste sweeter in fall as they concentrate sugars to withstand colder temperatures.

Our garden is brimming with greens ready for harvest now, as well as younger plants that we won’t harvest until early spring when they will grow rapidly as the days begin to lengthen.

Elliot Coleman coined the term “Persephone Days” for the period when there is less than 10 hours a day of sunlight and plant growth slows to a halt. Typically November 21st through January  21st, or a little longer due of outside ground temperatures. So what you see in the garden now is what you get until early February for practical purposes, unless you are growing under cover in a greenhouse, cold frame or low tunnel.

With an extended drought and weeks of record breaking highs, 2016 was a really tough year for establishing our fall crops. In many cases we had to do a third succession planting to get the beds full of thriving plants. In the case of spinach and kale, our last and most successful sowing was in early October. For an idea of what and when we sow most years read our blog post on Summer Sowing: Continuous Harvest All Summer into Fall or look at our Southern Exposure Fall and Winter Growing Guide.

So let’s take a look at some of what we have green and growing in the garden on “Black Friday Weekend 2016”:

Kale, collards, and spinach are our largest plantings for winter greens because of their versatility in the kitchen and dependable winter hardiness. Because our earliest succession plantings had spotty germination we have a lot more plants from the later sowings. Luckily for us the unusually warm temperatures continued into November so we have nice full beds of Abundant Bloomsdale spinach and Lacinato Rainbow kale going into December. Fortunately half grown ”juvenile” plants often survive the winter and last longer into the spring. In addition to the heat and drought our collards were also attacked by grasshoppers in August so the remaining plants are smaller than usual at this time. Heirloom collards are survivors so I expect they will do well and start vigorous growth again in early spring.

We have already harvested many of our oriental greens for stir-frying and to make Kimchee, but our Tatsoi greens are still looking and tasting great. In winter we enjoy the shiny dark green leaves in salads, stir-frys and soups. One interesting thing with the spotty germination on some of our early sowings is how large the plants can get in fall and still be sweet and tender.

Another favorite green for us and many others in our region are Creasy Greens and their cousin from grower Frank Morton of Wild Garden Seeds in the Northwest, Belle Isle Cress. They are lightly spicy and crisp in winter. Take care as they will naturalize if left in the garden to produce seed.

We also grow a lot of winter lettuce. I especially like red varieties for the deep color they develop in winter. Outredgeous and the Wild Garden Lettuce mix are favorites that have been joined by the heirloom Crawford, a Texas winter salad Lettuce.

We still have some winter roots in the ground: carrots, beets, salsify, parsnip and winter radishes. We have potatoes and sweet potatoes in storage.

Maybe we can look at what we still have canned, dried, fermented and frozen sometime soon. Until then enjoy your garden.

Warm weather and late April rains have our fall-planted crimson clover, winter rye, and Austrian winter peas growing like weeds and just starting to bloom.  As an edible bonus, the winter peas gave an abundance of sweet pea shoots to add to salads all winter and spring. The bright red flowers of crimson clover provide much-needed pollen and nectar for pollinators and other beneficial insects in spring.

To select the best cover crops for your garden, consider which functions are your priorities, the time of year, and how long the cover crop will be in the ground. Cover crops are important tools all year for filling in gaps between crops while also preventing soil erosion, suppressing weeds, providing habitat for pollinators, and improving fertility. Some even provide an edible bonus, for you and for pollinators. Here are some cover crop favorites in the Southeast.

Winter Soil Builders and Subsoil Looseners – for the surface or deeper down.

If you are in the upper South or in the mountains, cover your winter greens with row cover or plant in a cold frame for winter harvests. Left uncovered in cold winters, the leaves will be too damaged for good eating, but you’ll have fresh new growth in early spring if winter lows aren’t too bad.

Warm Season cover crops and filling in the summer gaps

Although fall through winter is the most common time when gardeners grow cover crops, savvy gardeners include summer cover crops in their garden plans. No matter which cover crops you choose or when you fit it in your garden rotation, cover crops allow you to grow your own nitrogen and organic matter in place.

When to Mow or Turn Under Cover Crops

A lot of factors go into determining the best time to turn under or at least cut down your winter cover crop. To get the most biomass, wait until half of the cover crop is in flower but make sure to get it cut down and incorporated before it goes to seed. Some freshly cut cover crops like winter rye inhibit seed germination for the following crop. If you are planning to direct seed allow 2 to 4 weeks for your cover crop to decompose before planting. This same property can be an advantage in weed suppression if the cover crop is just crimped or rolled and left as a mulch for transplanted tomatoes.

Another factor to consider is when you want to plant the next crop. For early spring plantings you may need to cut and turn in your cover crops well before flowering and allow a longer time (maybe 3 to 6 weeks) for the organic matter to decompose before planting. You can speed up decomposition of the cover crop 1 or 2 weeks by sprinkling in some mature compost or applying compost tea to add beneficial soil organisms before turning it under.

For most home gardens you can cut your cover crop with a hand sickle or scythe and add it to your compost. This leaves the considerable roots to add organic matter and aerate the soil. You can also weed-eat it or mow it and just let it lay there on the ground as mulch or till it in.  For the home gardener, Roto-tilling  is the fastest and easiest way to incorporate your cover crops, but you can also spade in your crop residues the old fashioned way. Digging in your covers crops aids in faster decomposition and less nitrogen loss into the atmosphere.

Spring is the perfect time to start a “Salad Garden.” Start harvesting fast with our quick guide to cool-weather-loving, fast-growing salad crops for the spring garden. 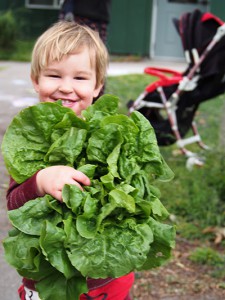 LETTUCE. In the summer and fall, starting lettuce seeds can be a struggle because the soil temperature is too high, but in early spring the seeds start readily, long before the soil has warmed enough for other crops. If summer heat comes on fast and early in your garden, you’ll want to choose heat-tolerant varieties, like sweet Jericho romaine, long-holding Cosmo romaine, the old-standard Oakleaf looseleaf, or the buttery butterheads Capitan and Buttercrunch (pictured). You can also choose fast-growing early varieties (any of the crisphead varieties, including favorites Loma and Sierra). If you still have a good window of cool-weather, there are several varieties with excellent flavor and texture that only grow well with cool spring weather: the heirloom Black-Seeded Simpson is highly recommended for early spring.

OTHER GREENS. Try these excellent spring salad greens in your lettuce mix, or leave out the lettuce altogether. Arugula, spinach, endive, highly nutritious cress (including the southern traditional creasy greens) and fast-growing, mild mustard greens like tatsoi and mizuna are all excellent choices for spring-growing. 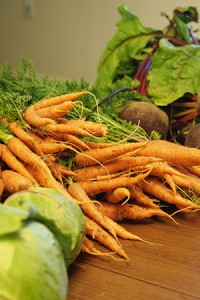 CARROTS. Many carrot varieties have their best flavor in the spring. Even soil moisture makes spring the easiest season to grow high-quality, crack-free carrots. Blocky Danvers 126 (pictured), Scarlet Nantes, and the heirloom Chantenay Red Core are all forgiving of different soil types, although it’s still important to loosen your soil to a good depth. Carrot seed is slow to germinate, so be patient, sow very shallowly (a quarter inch down or simply rake and water in the seeds), and keep the soil moist but not damp until the seedlings emerge. Sow every 1-2 weeks and harvest on the small side for the most tender carrots for salads. 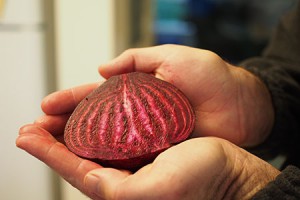 BEETS. Beets can take 2 weeks to germinate and they shouldn’t be transplanted, so sowing in the spring when the soil is cool and moist is your best bet for good germination and high-quality roots. Lutz Green Leaf (pictured) is an unusual heirloom that can be sown in the spring and harvested at any size, without becoming woody. Soak the seeds overnight, tamp them down well, and expect to thin the seedlings (each “seed” is a multi-seeded dried berry). For quick harvests, try fast-growing Early Wonder Tall Top (the tops make good salad greens when young) or rose-hued Chioggia.

PEAS. A classic early spring crop, snap peas are at their sweetest when eaten raw (and they’re also great for getting kids to eat raw vegetables). I prefer growing dwarf plants like Cascadia or Sugar Ann. They only need minimal support/trellising, and the fast growing plants tend to outpace any pest damage.