Rodger Winn and his wife Karen grow seeds for Southern Exposure, as well as vegetables for themselves and for a local market, in their 1.25-acre garden in Little Mountain, South Carolina.  On our recent trip to the Carolina Farm Stewardship Association Sustainable Agriculture Conference in Greenville, SC, we stopped in to see their place.  The area had just had an unusually early frost and snowfall, so the summer crops were dead, but the fall garden was green and gorgeous. 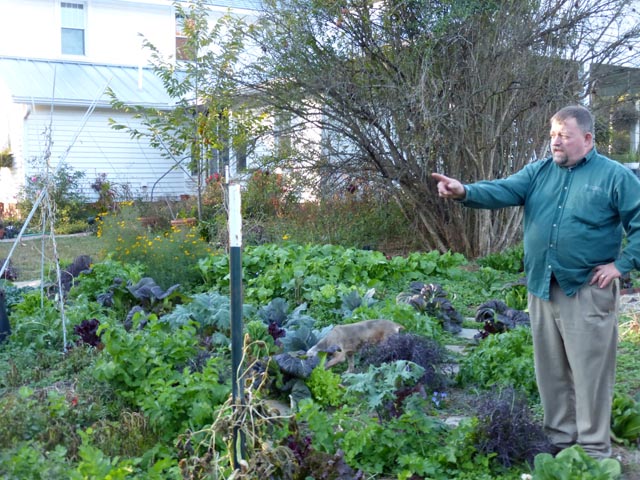 Rodger showed us several seed crops, including Charleston Hot pepper and Charleston Gold rice.  (We haven’t gotten the rice seed from him yet; it’ll go up on our website after we do.) We also found his bean trellising quite interesting.  It uses thin fiberglass poles kept in place with wire from an old fence. The space under the poles is not very high, but it’s high enough for a person to crouch and pick beans in the shade. 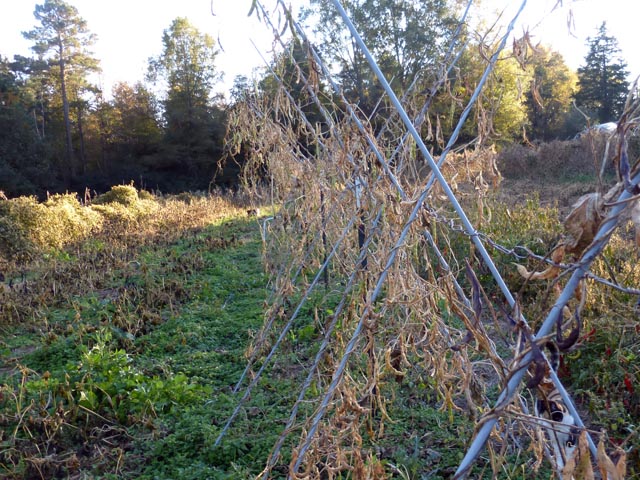 But the most interesting part of seeing the Winn farm was Rodger’s description of how he uses clover and straw to smother out weeds so that he needs neither a tractor nor herbicides.  In fall, around the time of his first frost, he broadcasts Crimson Clover over his main garden area. 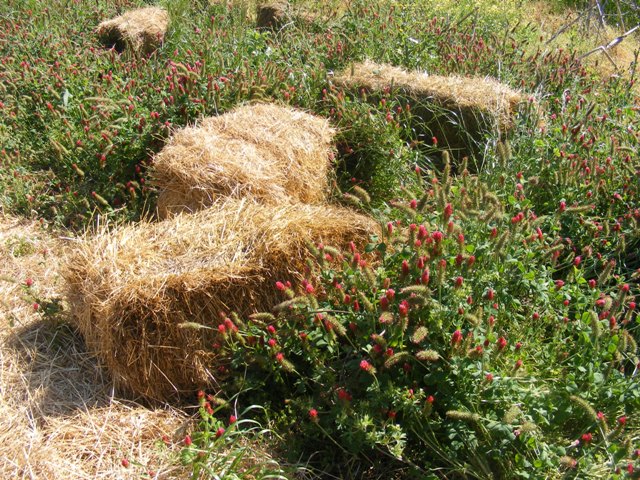 In spring, as he is getting ready to set out seedlings, he has 500 square bales of hay delivered, and spends one day covering the entire area with an 8-inch-thick layer of loose hay mulch.  He transplants most of his crops, including beans, melons, squash, and others that most gardeners and farmers would direct-sow.  However, he does direct sow some crops, including carrots, turnips, parsnips, and some greens, by raking back the hay to make a 6-inch-wide row, sprinkling compost, then sowing the seed and lightly raking over it. When the seed is up he pulls mulch up around the plants to limit weed growth.

Last year the Winns’ beans finished in August, drowned by a very wet summer, so he planted collards in the same row as the beans without pulling up the drip irrigation or the poles, as seen below to the left. That  January, he pulled up 40 of the best remaining collard plants and replanted them at the top of the garden, where they bloomed in late April of this year and produced seed, as seen below to the right. 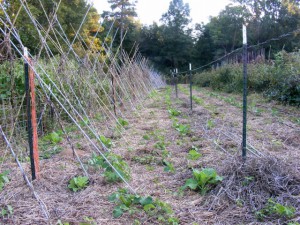 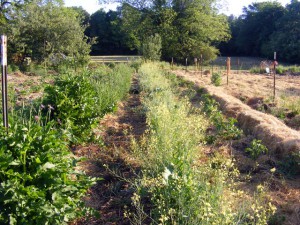 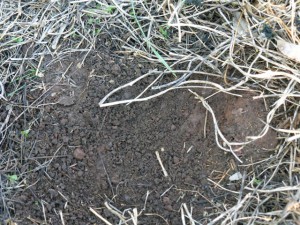 For the Winns, going no-till is a great way to save time in the garden, as they don’t have to hoe or thin most of their crops, or ever bring a tractor into the garden.  They also don’t have to remove trellising and drip irrigation as often as farmers who till.  The method also builds great soil.  In 1998, the farm had hard red clay soil.  Now, while the subsoil is still hard red clay, the topsoil is a rich, dark loam created by sixteen years of nitrogen-fixing clover cover crops, ten years of thick, carbon-rich hay mulch, and three years holding nutrients in the soil by not tilling.

We’re excited to try out a system like Rodger’s on our own farm, but with many other projects on our plates, we’ll probably start it on a small section of our land, with hopes of expanding it to cover larger sections of our gardens in the future.

You can read more about Rodger and his love of heirloom seeds in Bill Best’s book Saving Seeds, Preserving Taste.

We’ve been trying to grow and offer seed for Cosmo lettuce. But we have only a little bit of experience with saving lettuce seed on our own farm, so it’s challenging to get a good seed crop of a large enough size. 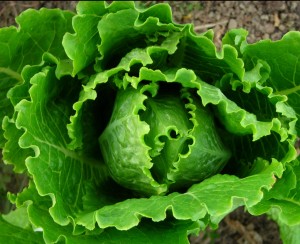 We let the lettuce head up, then bolt, becoming too bitter to eat, then flower, and finally make seed. (Lettuce plants become a lot bigger when they bolt and flower, so before they bolted we made more room by harvesting every other head for eating.) 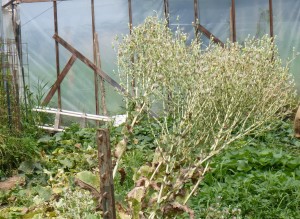 Although it’s possible to save lettuce seed outside, even in our wet climate, growing it in our high tunnel keeps the rain off of the seedheads. This greatly increases our chances of getting a good germination rate and being able to sell the seed. We’ve put up a rope around the bed, tied at waist height to six posts, so that the lettuce stalks can lean on it and so that the seedheads won’t lie on the moist ground. Nonetheless, our first harvest looked terribly disappointing. 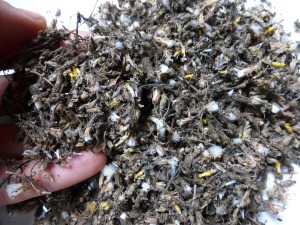 It’s been a wet spring, and this harvest came after a period of much rain and humidity. I thought we had a crop failure – too little seed to be worth the time it would take to separate it from the chaff. I almost gave up. I moved lettuce seed harvesting down on my list of priorities. But the next harvest, after a couple days of dry weather, gave me a pleasant surprise. 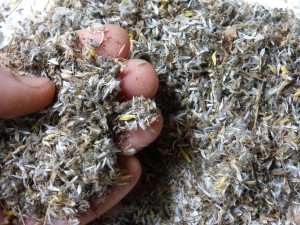 This time, when I shook and rubbed the seedheads over my tray, a significant amount of mature-looking seed fell out along with the chaff. However, it seems some of the seedheads dried up before producing good seed. Shaking old, dry seedheads still basically just gave me chaff, not seeds. A day later, there was rain in the forecast, so I collected a small, early harvest. 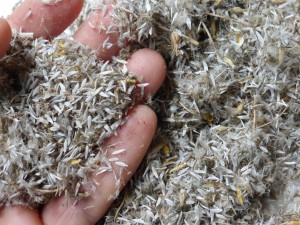 I was quite surprised that I got so little chaff and so much seed. Of course, even this seed will need to be winnowed and screened to clean off the chaff. Then its germination will need to be tested before we’ll know if we have enough good seed to list this variety.

For more on how to save seeds, see our Seed-Saving for Home Use handout. Later this year I’ll post more information on how to clean seed by winnowing with a box fan.