Leeks have a long and cultured history. Some of the earliest records of leeks come from Egypt. There dried leeks were found in archeological digs as well as in carvings and drawings. They were also consumed in ancient Rome and are said to have been a favorite of the emperor Nero.

Later leeks were brought to Wales where they gained impressive notoriety. According to legend, a monk named David suggested to the Welsh that they wear leeks on their helmets to distinguish themselves from the enemy in their famous fight against the Saxons in the battle of Heathfield in 633 AD. Later that monk became St. David. To this day the Welsh still wear leeks on St. David’s Day and the leek is a Welsh national emblem.

Leeks are surprisingly easy to start from seed and plant. To start from seed you’ll need a tray full of good quality potting soil. You don’t need separate cells for leeks though they’ll do fine in cells if that’s easiest for you. Generously spread seed in the tray, lightly cover it with soil, and water them in.

Once your bed is ready, gently tease the plants apart. You don’t need to worry about keeping soil with each plant just try to avoid damaging the roots. Then place one leek in each hole, making sure the roots are touching the bottom. Do not fill the holes in. The deep holes create nice blanched, white stems and by filling them in you can get dirt between the leaves. 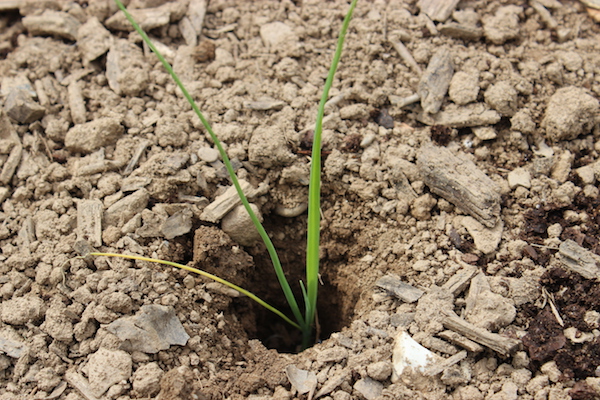 Once they’re all planted you should carefully water them in. Watering will stir up enough soil to cover the roots at the bottom but you should do so gently as to avoid filling in the entire hole. Once they’re established you can mulch around them with hay, straw, leaves, or grass clippings to cut down on weeds and keep the stems white.

Harvesting leeks is a bit like harvesting carrots. It’s best to loosen the soil with a garden fork before you pull them to avoid breaking them. Try to avoid spearing any, of course.

You should chop off the long roots and outer, tough leaves into a ‘V’ shape. If you’re harvesting quite a few it’s best to place them, base down in a bucket with a bit of water to help them stay fresh.

One of the best ways to store leeks is by just leaving them in the garden. Winter varieties of leeks are very cold tolerant, handling temperatures down to 10°F. In many areas, they can be overwintered in the garden providing fresh produce when little else is coming in.

If you must harvest your leeks you can store them fresh in the refrigerator or in wet sand in a root cellar. Leeks can also be dehydrated or frozen. To dehydrate you want to slice them into thin pieces and dry them in a single layer in a dehydrator. You can freeze leeks the same way on a cookie sheet before transferring them to a container for easy use.

Potato and leek soup is an obvious classic but leeks are incredibly versatile. They’re milder than a regular onion and are excellent for galettes, pasta dishes, or just sauteed with some fresh greens or cabbage.

Pin it for later! 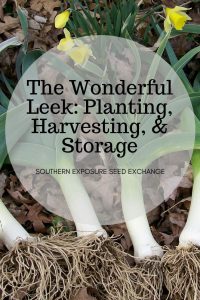