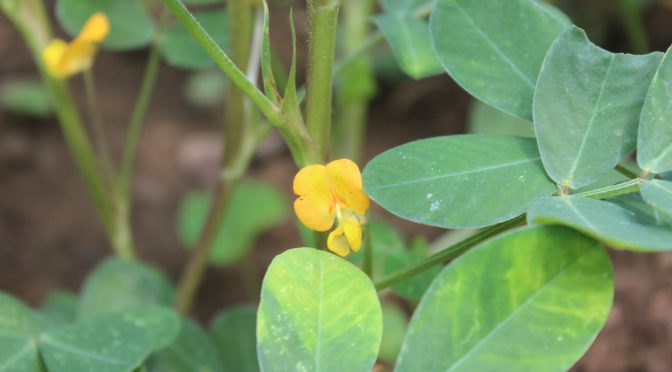 Our culture’s obsession with peanut butter is a relatively modern development but peanuts have been an important crop for more than 3000 years! For those who are unfamiliar, peanuts aren’t actually nuts. They’re a member of the legume family like peas and beans. Just like other legumes, they’re a handy crop because they fix nitrogen.

Peanuts are an important food crop because they’re high in protein, fat, B vitamins, and a variety of minerals. They also store well, lasting 10 months when kept in the shell in a cool and dry environment.

It Starts in Peru

Peanuts were probably first domesticated in Peru where archeologists have found peanut traces in pre-Columbian Peruvian mummy bundles. Peanut designs can also be found on a variety of Moche (a pre-Incan civilization) art and ceramics. One of the most impressive examples is a necklace with 20 gold and silver peanut replicas found in the burial of Lord of Sipán in the Reque Valley, a member of the Moche ruling elite.

Evidence suggests that peanuts were not a staple crop in Peru but had important ceremonial and economic value. From Peru peanuts were spread to Brazil where they became an important food source.

If you’re interested in further reading about the historical use of peanuts in Peru I highly recommend this article, Peanuts and Power in the Andes: The Social Archeology of Plant Remains from the Virú Valley, Peru.

When the Spanish and Portuguese began to explore and colonize South America Peanuts had spread throughout the continent and as far north as Mexico. The Portuguese and Spanish spread peanuts to Europe and to West Africa where they quickly became an important food crop. The Bantu name for peanut is nguba which was later anglicized to goober.

Peanuts were brought to the Southern United States by slaves. They were sometimes the only food rationed to slaves captured in West Africa on the horrific Middle Passage voyage to the new world. In the United States slaves continued to grow peanuts. They were then grown commercially but were thought of as food for the poor, slaves, and livestock by upper and middle-class whites.

The outbreak of the Civil War saw a notable increase in the U.S. consumption of peanuts. Both Northern and Southern soldiers developed a taste for peanuts and after the Civil War they began to be sold as a snack especially in the cheaper seating sections at baseball games and circuses. This earned these sections the name, “the peanut gallery.”

Around 1900 mechanical equipment was invented to help speed up peanut planting, cultivating, harvesting, and processing helping make peanuts a more profitable crop. Just a few years later in 1903 botanist, George Washington Carver began experimenting with peanuts at the Tuskegee Institute. He played a large role in encouraging southern farmers to rotate their cotton fields with peanuts. This helps to preserve soil health, reduce pest and disease issues, and gave farmers another cash crop while they were struggling with the boll weevil.

When most people think of peanuts they think of food but peanuts are actually a source of glycerol which is used to make explosives. Peanuts were used during both World Wars for U.S. ammunition.

The U.S. peanut industry was further expanded during WWII after the Japanese captured Southeast Asia which had been a large source of vegetable oil. Farmers increased peanut crops to meet the new demand for U.S. vegetable oil.

Check out this article from Atlanta in 1942: Peanut Growers Meet War Demands.

Today the U.S. is the third-largest producer of peanuts just behind China and India. Peanuts have shifted from Peruvian ceremonial food to a major world crop. From PB&J sandwiches, to African peanut soup and spicy Indonesian peanut sauce the world has fallen in love with this awesome plant.

How to Grow Peanuts

There’s nothing like home roasted peanuts and peanut butter. To learn how to grow your own check out our Peanut Growing Guide or post Growing Peanuts at Home.