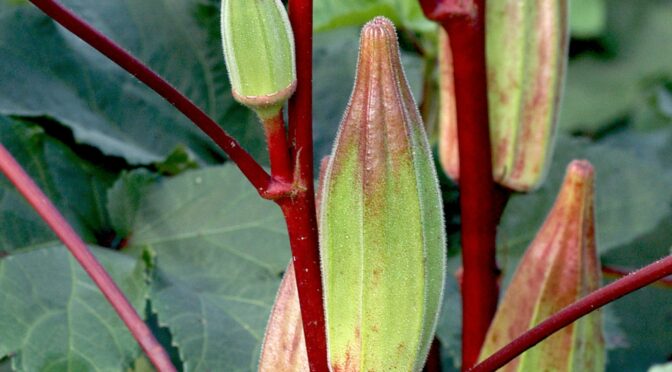 Okra has long been a common crop in southern gardens. This warm-weather-loving plant originated in northeast Africa and was brought to the U.S. in the late 1660s by way of the slave trade or via Europe. Its high mucilage content makes it an excellent vegetable for thickening soups and stew, but it’s got many other uses too! Grow your own with this beginner’s guide to growing okra.

Okra needs a location with full sun to maximize production. It thrives in fertile, loamy, well-drained soil. The ideal soil pH is between 6.5 and 7.0. Okra does best with lots of hummus, so it’s good to add a couple of inches of well-aged compost to the bed before planting. 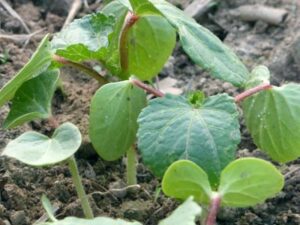 Okra seeds have a hard seed coat and germinate slowly, especially in older varieties. To speed things up, soak your seed overnight before planting. Alternatively, you can use a technique called scarification. It sounds complicated, but it just means you use sandpaper to lightly abrade the seed coat before planting, helping it break down faster.

Okra can be started indoors or direct sown. To start indoors, sow in pots 2 to 3 weeks before planting out. To direct sow okra, wait until all danger of frost has passed and the soil temperature averages 65°F. Sow seeds 3/4 to 1 inches deep.

If you live in a northern climate, sow okra indoors 2 to 3 weeks before your last frost date. Some folks with high tunnels or other season extension methods may be able to set them out a bit earlier; just make sure they have plenty of room to grow. Okra can get up to 6 feet tall!

If you’ve started your seeds indoors, be sure to harden off your okra like other seedlings before transplanting. It’s best to transplant on an overcast day or in the evening. Water your plants in well.

Sow or transplant your okra into rows 5 to 6 feet apart. Transplant or thin your okra to 18 inches apart in the rows.

Once plants are a few inches tall, mulch heavily around them, this keeps the soil cool and moist and helps suppress weeds.

Keep okra plants well watered through the summer. They are most productive and disease-resistant when grown in moist soil.

Some folks side-dress okra with compost of balanced fertilizer once they’re about 6 inches tall. However, you want to avoid over-fertilizing. Too much nitrogen encourages okra to put more energy into leaf production and little into flower and pod production.

Grow okra on a 4-year garden rotation plan to avoid pest and disease issues. It’s worth noting that older okra varieties are more resistant to root-knot nematodes due to their deep root systems. Grasshoppers may eat your okras’ lower leaves.

Most okra varieties are best when harvested between 2 and 4 inches long. Pod tenderness will vary over the season. You may be able to snap young pods off with your hands, or you can use hand pruners to cut them.

You may want to wear gloves and long sleeves when harvesting okra. Okra has hairy leaves and tiny spines on the pods, which irritate most people’s skin. 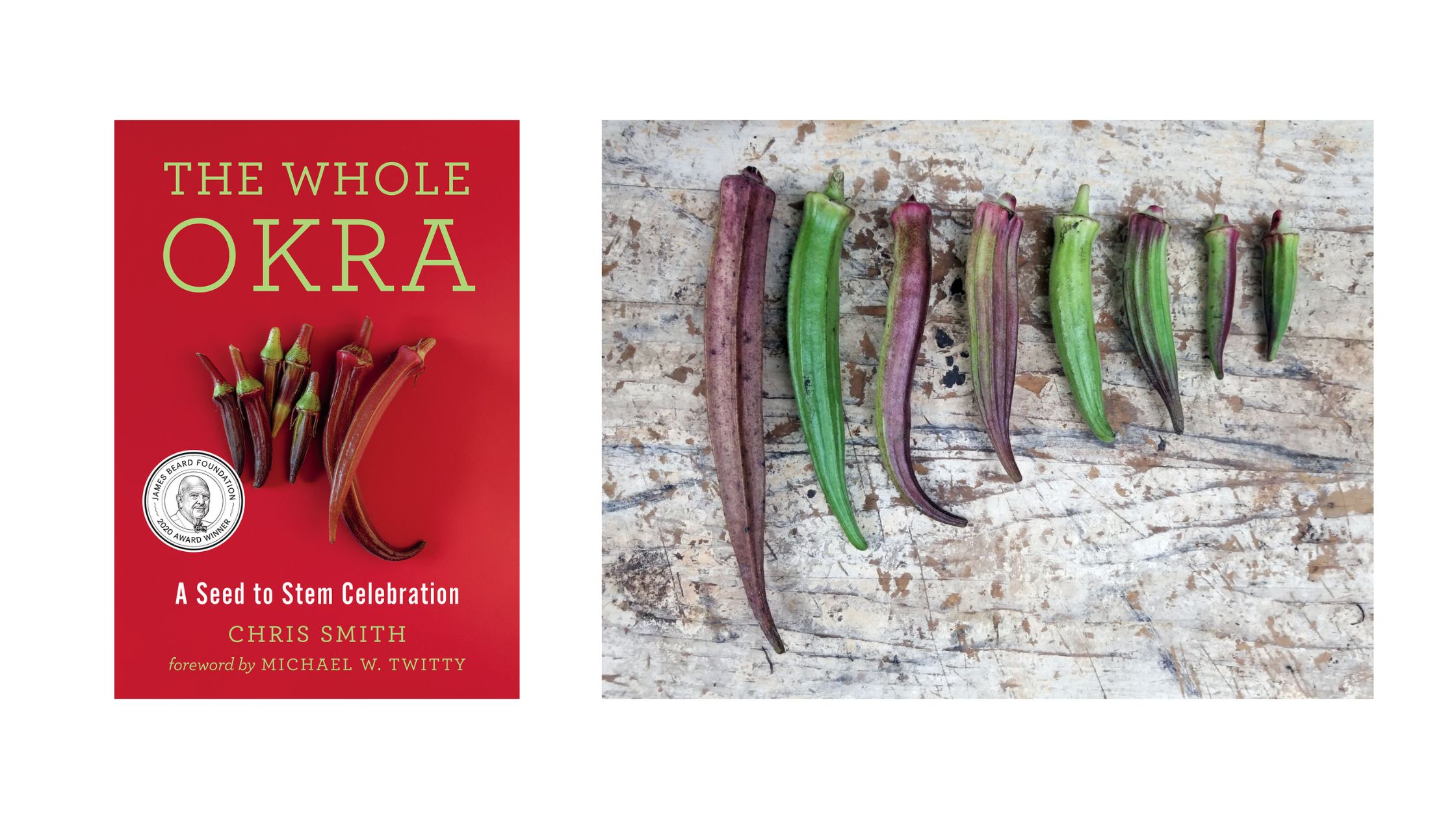 If you want to learn more about this amazing crop, check out The Whole Okra: A Stem to Stem Celebration by our friend Chris Smith. He provides excellent growing advice, history, recipes from chefs, and a fantastic look at the many uses for okra, including okra oil, okra coffee, okra marshmallows, okra tofu, okra vodka, okra pickles, okra pancakes.

Be sure to visit us on Instagram this week! We’re giving away a copy of The Whole Okra and a packet of one of Smith’s favorites, Puerto Rico Everblush Okra. Visit us on Instagram @southernexposureseed before Thursday, May 5th, 2022, at midnight EST to enter for your chance to win. 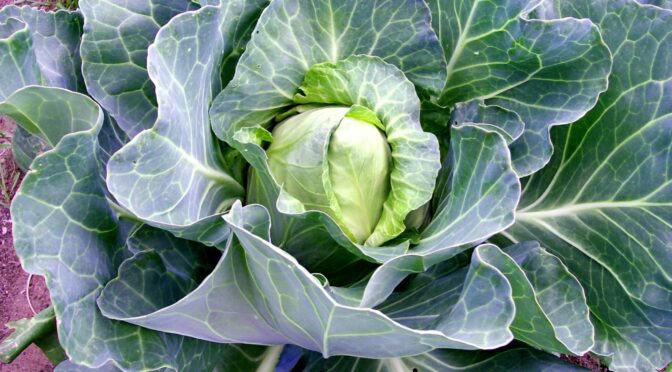 Most seed savers get started with a few large-seeded, easy-to-grow and harvest crops, like beans, corn, tomatoes, peppers, and squash. If you’re ready to take the next step in your seed-saving journey or have an adventurous spirit, you may be ready to tackle cabbage. Saving cabbage seed can be tricky for a couple of reasons, but it is doable. Keep reading to learn the steps to save seed from your favorite cabbage varieties.

To prevent this problem, all you need to do is only let one of your brassicas go to flower each year. Harvest the others before they bolt. Unlike many brassicas, cabbages are biennial, meaning they flower and set seed the second year. This can be helpful when preventing them from crossing with other seed crops.

If you’re determined to save seed from multiple brassicas or cabbage varieties, you’ll need to isolate them. For home use, isolate your cabbages by 1/8 of a mile. For pure seed, small plantings need to be isolated by 14 to 1/2 a mile! 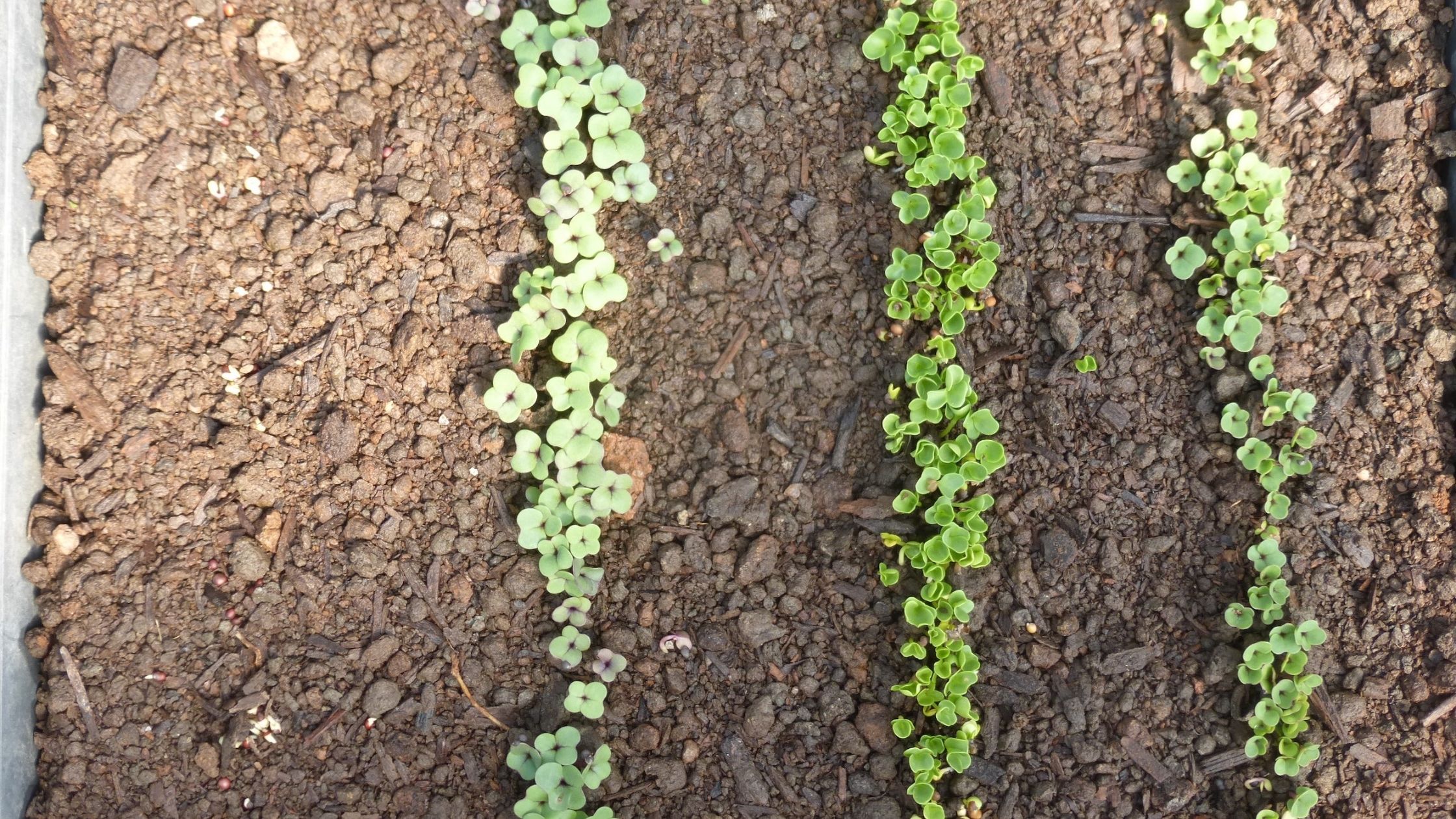 When you save seed, you want to think about maintaining the quality of a variety or maybe even improving it each year. To do this, you should save seed from your best plants. You can consider disease resistance, drought tolerance, earliness, flavor, and more when selecting plants. Check out our blog post, Selecting Plant Characteristics, to learn more.

You also want to ensure you save seed from enough plants to preserve viable genetics. For home use, five plants may be enough. However, to maintain a variety over a long period, you want to save seed from 20 to 50 plants each year.

Cabbage is a biennial, meaning that it flowers and sets seed during its second year of life. To get your cabbage to set seed, you’ll need it to overwinter. In areas with 10 to 12 weeks of cool weather below 50°F that doesn’t regularly dip below 35°F, you can overwinter cabbages in the field.

If you live in a colder climate, you’ll need to overwinter your cabbages in a sheltered location. Dig them up and pot them in large containers filled with damp potting mix or sand. Leave the heads intact but trim off any loose or dying leaves. Keep the roots as intact as possible.

Move the containers into a root cellar or unheated basement, garage, or shed. Ideally, you want to keep them between 34 and 40°F. In the spring, plant them back out in the field. You may need to stake them.

You need to catch cabbage seeds at the right time. They won’t continue to mature once removed from the plant, so it’s crucial to ensure that the seed pods and the seeds inside become dry and brown. Don’t wait too long, though! Dry pods may begin to shatter and drop seeds, or birds may take them.

It’s easiest to harvest seeds by cutting off entire branches. Then place them on an old sheet. You can use your hands to break the pods or thresh them by hitting them with a thick stick or rod. Mature seed should separate from the pods readily.

Once seeds are fully dry they can be stored somewhere cool and dark in airtight containers. Cabbage seed should remain viable for several years. Learn how to do a simple germination test here. 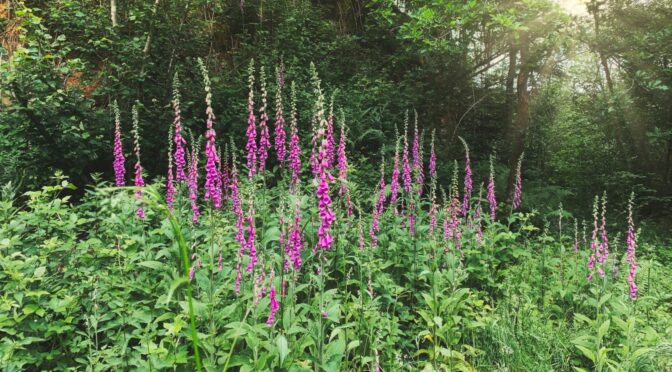 Gardening is an age-old occupation, and over the years, gardeners have come up with some interesting ways to improve their production. Garden folklore has helped gardeners decide when to plant, how to plant, when to harvest, and other essential tasks over the years. Some of these traditions have a solid basis; others maybe not so much. We’ll let you decide.

Never say “thank you” for a plant.

A common belief in Appalachia is that you should never thank someone for a plant or cutting. Some folks say it’s just bad luck and others say the plant will die. Either way, best to just give a response like, “what a gorgeous a pepper.”

Foxglove is often associated with fairies or witches.

People once believed that foxgloves were associated with faeries. Foxgloves grew where the faeries flourished, and planting them would invite faeries to your garden. It was considered bad luck to cut them.

Today some believe that the name foxglove may have been initially “folk’s glove” as fairies were sometimes referred to as “the folk.” In Norwegian folklore, it was believed they were named foxgloves because faeries taught foxes how to ring the foxgloves’ bell-shaped flowers and warn each other of hunters.

Witches were reported to make ointments and balms from foxglove that allowed them to fly. Although foxglove may have never allowed anyone to physically fly, there is some tidbit of truth behind this belief. An herbal preparation called “flying ointments” were once created from various hallucinogenic and toxic plants and allowed the users to have visions. You can read a bit more about this odd tradition here.

Never consume or use any part of foxglove in an ointment or herbal remedy. All parts of the plant are extremely toxic.

Plant your corn when the oak leaves are the size of a squirrel’s ear.

We still include this one in our corn-growing guide! Corn should be planted after your first average frost-free date, and you can usually count on the oak leaves starting to grow by then. 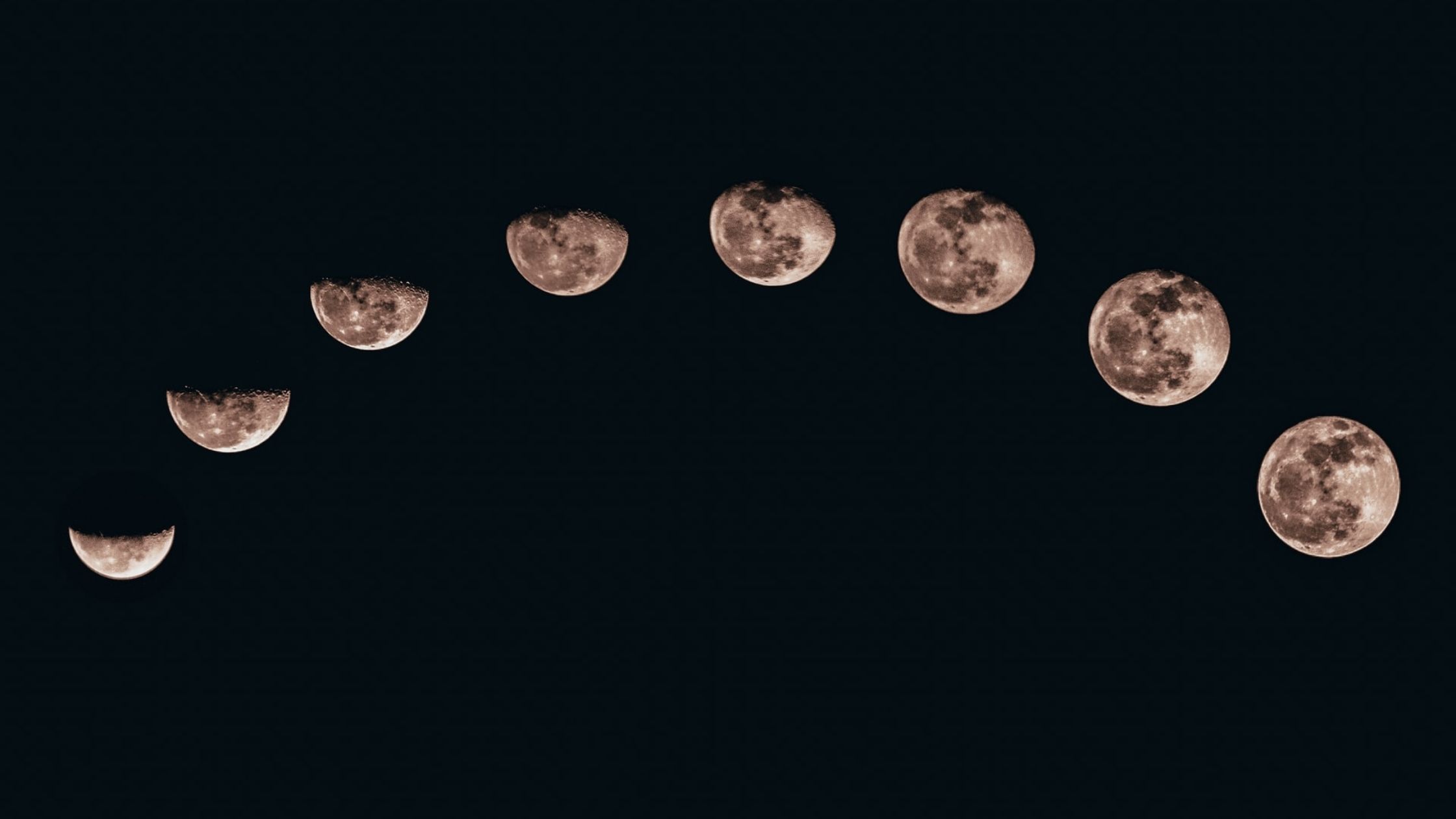 Planting by the phases of the moon was once a common tradition and is still used by many gardeners. A common belief was that the moonlight increasing or decreasing each night affected which plant parts would grow best.

In many parts of the U.S., it was considered good luck to plant these crops on St. Patrick’s Day. This generally works well for folks in zone 5 or higher. Other folks believe it’s best to plant potatoes on Good Friday.

It’s time to plant when you can sit on your garden soil without pants on and not get cold.

This is a funny old bit of folklore but it still rings true. Many vegetable crops need warm soils (around 60°F) to germinate and grow well. Soil thermometers weren’t always as easy to come by as they are today and gardeners have always been a determined lot!

Traditionally, people hung bundles of fennel over doorways to ward off evil spirits, witches, and demons. Some folks went as far as to stuff it in gaps and keyholes to help seal their home from evil.

Add Epsom salts to your soil to fix plant issues.

I’ve seen this one floating around the internet lately, and it may rarely be correct. Epsom salts contain magnesium and sulfur, which plants do need. However, these are just two nutrients your plants need, and odds are your soil isn’t deficient in them. If you’re having a lot of issues keeping plants healthy, get a soil test and learn how to understand it.

There are a couple of versions of this one. Some say it’s all plants, while others say it’s just herbs. Sometimes stealing the plants is good luck in general, while others say the plant will grow better. This tradition is still alive today, and some people will turn around when giving away plants so that the recipient can “steal” them.

Planting peppers when you’re mad will make the peppers hotter.

I’m not sure when this one got started, but it’s a fun bit of folklore. Next time you’re mad about the weeds or wildlife getting into your garden, add a few more pepper plants and let us know how this one goes.

Do you have any garden traditions? Have you tried any of these? Let us know on Facebook! While not all these traditions are practical, they are fun to think about!