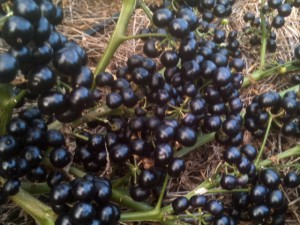 If you want to make great jam, syrup, or pies from annual fruits that you can grow in your vegetable garden, you’ll love garden huckleberries.

We’re planning on starting our pepper crops any day now in Central Virginia, and soon we’ll be seeding other crops in the same family in our greenhouse for later transplanting.  We’ll include several dozen kinds of tomatoes, a few kinds of eggplants, and also a few little-known crops like ground cherries, tomatillos, poha berries, and garden huckleberries, starting and transplanting them along with our tomatoes. 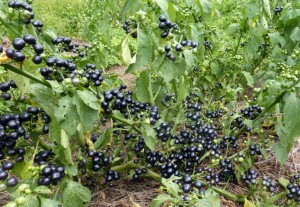 We grew garden huckleberries for the first time in 2013.  I planted a couple of plants to decide whether we’d want to sell the seeds. The plants were severely attacked by flea beetles but nevertheless bore a heavy crop of easy-to-pick berries that ripened from green to shiny black to dull black.

Ira did some research and decided to make jam, despite the complete lack of sweetness of the berries themselves.  But Ira is very busy, and a couple of weeks went by between the harvest of the berries and the making of the jam.  We were impressed by how well the berries held up. 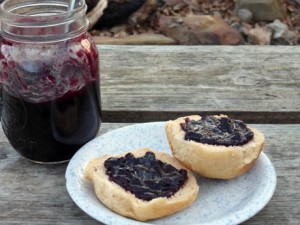 For every 6 pints of berries, Ira used 4 cups of sugar, a dash of lemon juice, and one box of low-sugar pectin. The jam tasted great – not quite like blueberry jam, but similar enough that, with its dark color, some of our housemates initially thought that was what they were eating.

In 2014, I planted eight garden huckleberry plants with the idea that we could decide later whether to harvest for jam or for seeds or try to do both.  When fall came and the berries were turning black, we had a brief moment of worry when we realized that I really wanted to save seeds for sale and Ira really wanted to make jam. 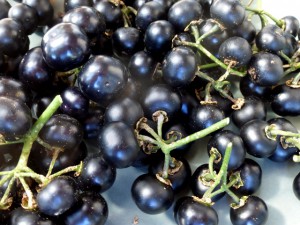 As it turned out, our eight plants gave us enough berries for a few dozen quarts of jam and enough seed to fill several hundred packets.  We didn’t strain the seeds out of the jam, nor have we found them noticeable.  The berries keep so well both on and off the plants that we got all of our seeds and all of our jam from two harvests.  We could have even done it with one harvest if we’d wanted to.

While the blueberry bushes on our farm are growing to fruit-bearing size, I think we’ll plant garden huckleberry every year (even when we don’t need to grow a seed crop of it) so that we can make jam from the berries.  Even when the blueberry bushes start bearing heavily, we’ll have to hope that the birds in our area don’t devour them before we do, and we might have to protect the bushes with netting.  On the other hand, I’ve already seen our masses of garden huckleberries ripen untouched by birds and other wild animals.  Like us, the critters don’t want these berries in their raw, unsweetened state.

Garden huckleberry is closely related to Black Nightshade.  And the leaves and berries of Black Nightshade may sometimes be poisonous, though they have also been cooked and eaten for centuries — and in diverse cuisines.  But to be on the safe side, in the case of black nightshade, I think it is best that we eat only strains that we know to be safe, and only when they’ve been harvested and prepared in a way that we know to be safe.

In the case of garden huckleberry, I have personally bitten into and tasted quite a few of the raw berries, with no ill effect, but to err on the side of safety, I think it best that we eat only the cooked ripe berries.