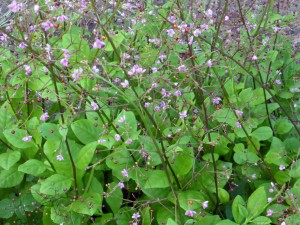 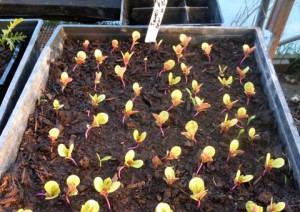 A wonderful surprise for us in our 2014 trial garden was Jewels of Opar. Last spring, when I planted a couple of pinches of these tiny seeds in a flat in our greenhouse, I certainly didn’t imagine we would harvest enough seed to put it in our 2015 catalog. My plan was only to evaluate its taste, texture, yield, and other eating qualities, to save and test a bit of seed, and to decide if we wanted to grow a real seed crop of it in 2015.

Soon that little row of seedlings was spread out to cover two seedling flats.  When we were sure our spring frosts were over, we planted 15 bedfeet in our kitchen garden, and then another 30 bedfeet in our high tunnel. The plants started to flower before they got more than 2 inches wide, sending up tiny stalks with pink buds.  I worried that maybe the transplants had needed more care than I had given them, or that maybe something else had caused them to bolt early. I had no real need to worry.

From June until frost, our Jewels of Opar plants sent up panicle after panicle of tiny pink flowers without deadheading. It did well in full sun and in part shade.  In the late afternoons of July the flowers opened in impressive profusion and really did bring jewels to mind. And then I knew why this wonderful green leafy vegetable is better known to flower gardeners than to vegetable farmers. 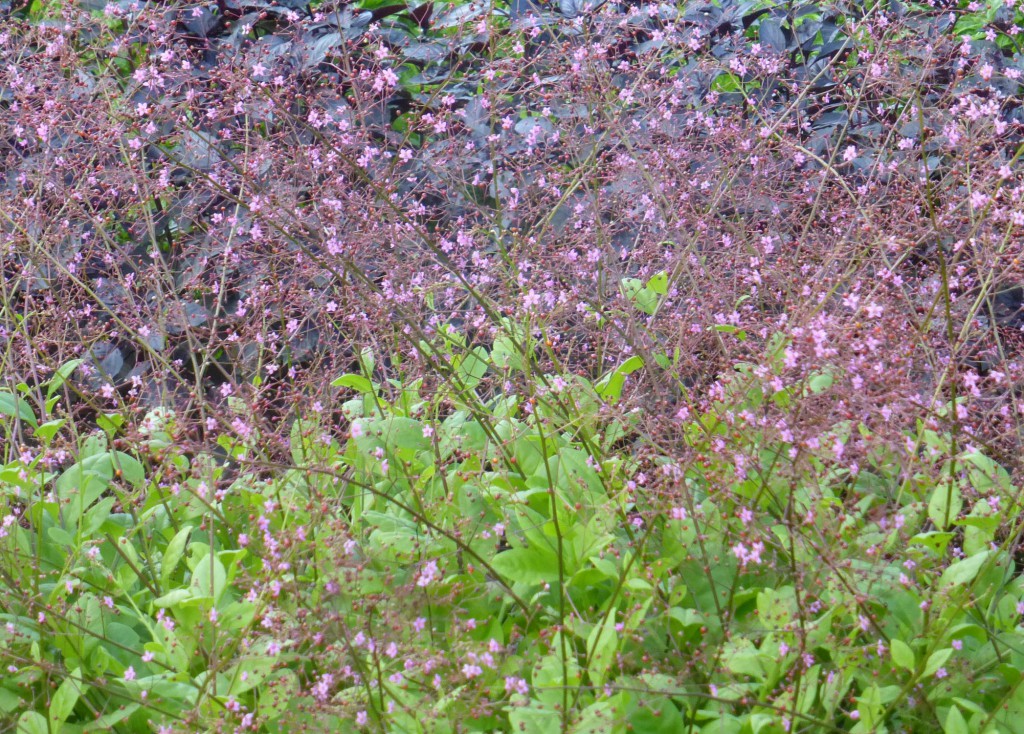 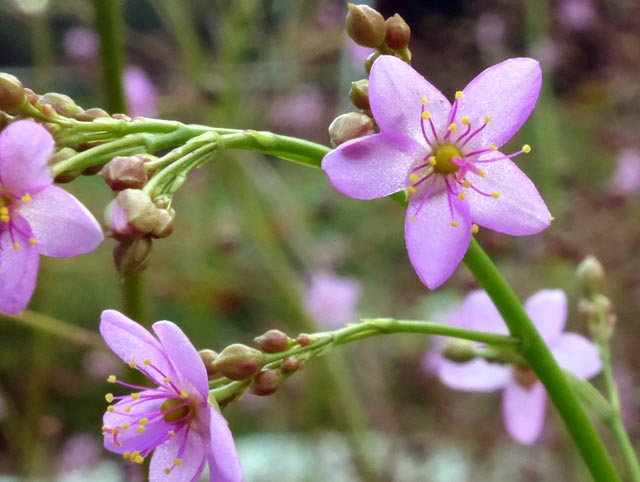 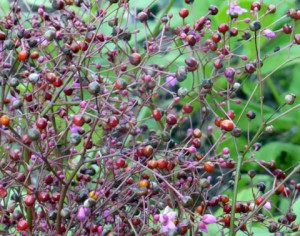 Each panicle continued making new flowers and buds even as its earlier seeds matured.  The plants also continued sending up new flower panicles throughout the season.  They attracted bees and other pollinators.  The seed pods have a very attractive set of earth tones, and even after they are blackened by frost (as below right), the seed stalks could make a great addition to dried flower arrangements. 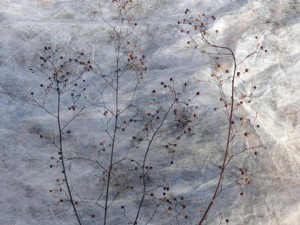 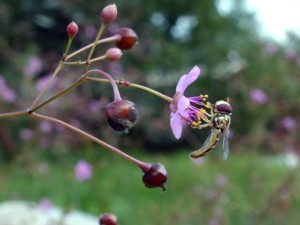 I tasted a few leaves as I transplanted the seedlings, and found the succulent greens surprisingly appealing.  It’s hard to find greens that both do well in the height of our summers and have an appealing taste and texture for eating raw in significant quantities. Lettuce requires extra care in summer.  Many succulents such as Malabar Spinach have a mucilaginous texture.  Jewels of Opar is a bit mucilaginous, but less so than Malabar Spinach, and much less so than okra. The small size of the leaves – up to about 4 inches long – was probably the most significant factor limiting my own consumption of this vegetable.

As it continued to flower, our Jewels of Opar also continued to taste good. If lettuces are allowed to flower, they become extremely bitter, so they get harvested long before that. When arugula, mustards, kales, and other plants in the brassica family go to flower, the leaves and stems become tougher, stronger-flavored, and, according to most Americans’ tastes, less palatable. But the leaves of Jewels of Opar remain tender and mild.  And after I cut the plants back in one section of the bed, they sent up a profusion of tender new shoots (below right). 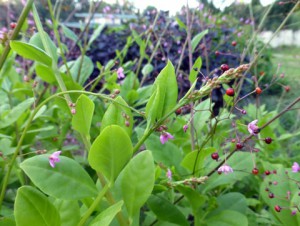 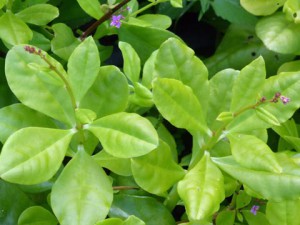 Jewels of Opar often self-sows in gardens, coming up on its own in areas near where it’s been planted. For us, new self-sown seedlings were already coming up by early fall of 2014. Sometimes it even escapes and comes up year after year as a wild plant.  However, most gardeners don’t find it to be problematic even when it self-sows.  Extra seedlings are easy to pull up, and the seedlings that you decide to keep can be a great addition to your summer diet and your garden aesthetic.  Also, Jewels of Opar is listed as a native species in the Caribbean and parts of the Southeast US, which is an advantage if you want to attract native pollinators or if you want to grow native species for any other reason.

I turned the photo below into my personal e-mail backdrop.  Click here for a version large enough to do that. 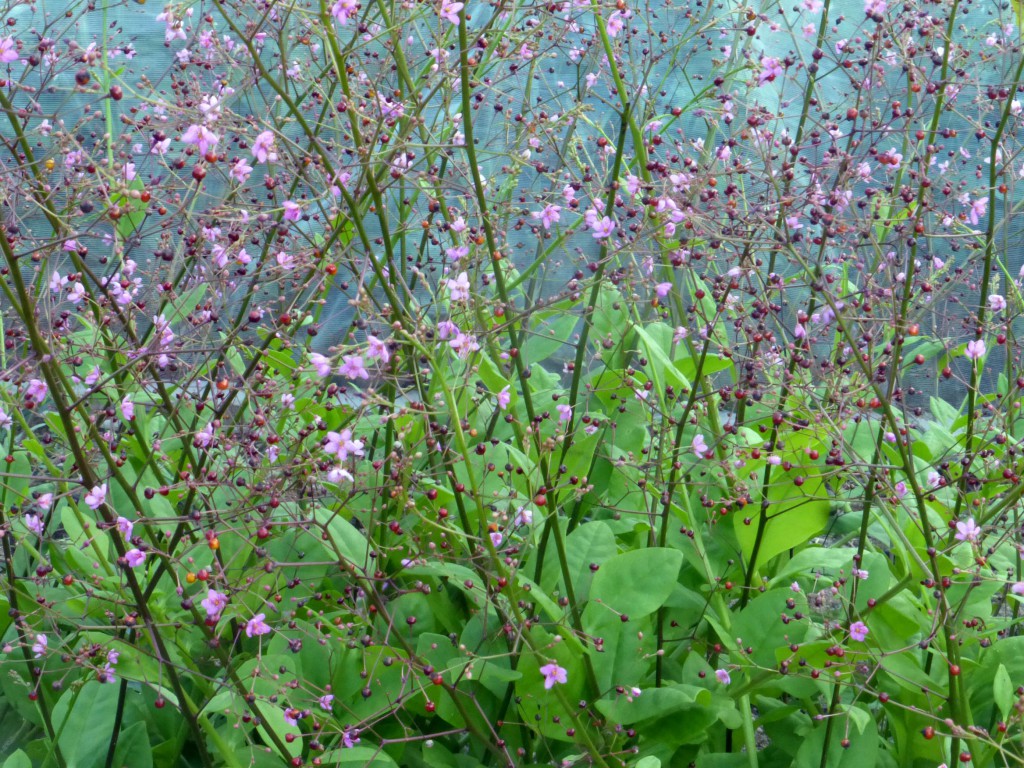